What Effect do Kittens Have on the Adoption Rates of Non-Kittens?

For high volume shelters, moving animals out the door as quickly as possible is crucial, and running a successful adoption program is one way to achieve quick movement. There is a plethora of ways to create adoption success: strong adoption promotion, open adoptions procedures, and reasonable adoption fees. But, have you ever thought about what impact the mix of animals in the adoption room has on the overall adoption rates? Specifically, does the presence of kittens help or hinder the adoption rate of older cats?

Dr. Kate Hurley and Dr. Sandra Newbury of the UC Davis Koret Shelter Medicine Program (http://www.sheltermedicine.com/) have lectured and researched this concept. According to their lectures, in adoption rooms across the nation “the more, the merrier” notion is often employed without much thought to animal presentation or organization. We pack as many cats into the adoption room as possible, and leave it up to the animals to sell themselves. Those shelter animals are so darn adorable and do a great job of it, but research and data are actually showing that a little forethought and planning can improve adoption rates. In his book, The Paradox of Choice: Why More is Less, author Barry Schwartz argues that eliminating consumer choices can greatly reduce anxiety for shoppers. So, extrapolating this concept to an adoption room is another way that animal shelters can work to improve their adoption rates.

A few notes about these data:


That being said, let’s look at the data: 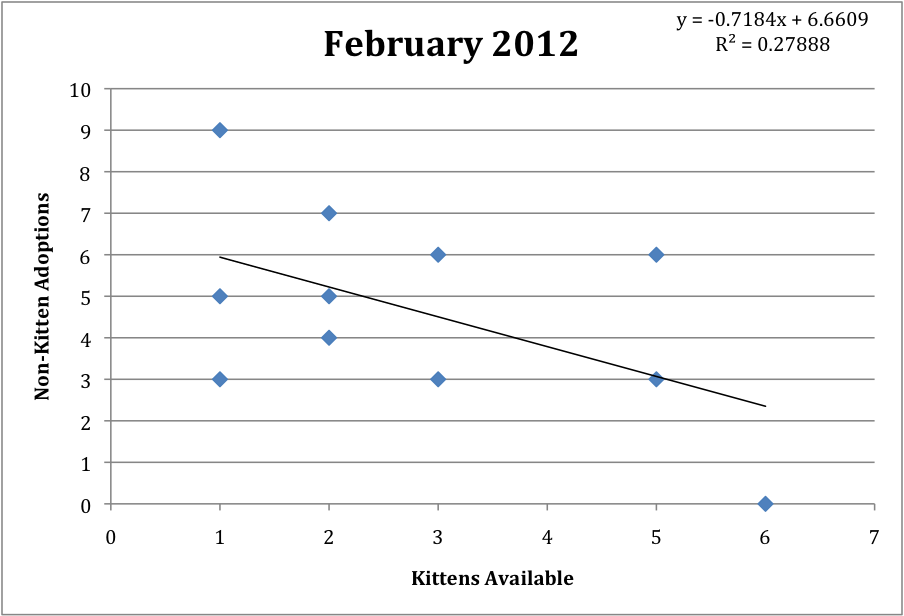 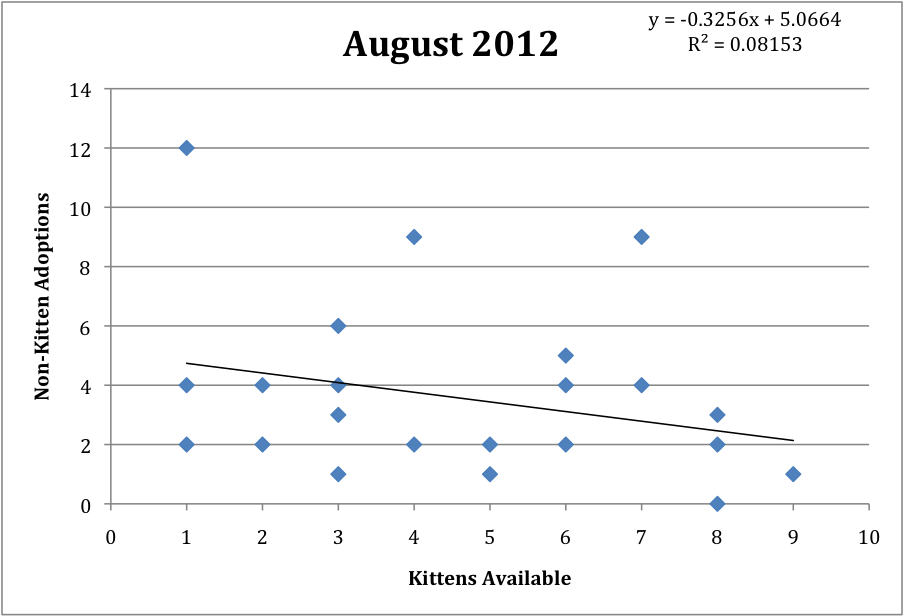 Analysis:
We can ascertain from the negative slope of the trend line for both months that having kittens available for adoption actually detracts from adoption rates of non-kittens. But, the negative slope improves in August—a time when kitten intake is at its highest:

So, does this mean that shelters should not make kittens available for adoption? Certainly not! But, analyzing data in this way can be the first step towards understanding adoption patterns and choices. Knowing that kittens will take away from adoptions of other cats will help shelter managers space kitten arrival in the adoption room or increase their use of foster-to-adoption programs (an emerging trend in animal sheltering to “foster” underage kittens to families with the eventual hope/mutual understanding that the family will adopt the kitten when it is of age) for young and underage kittens.

Moving forward, shelters can analyze their data in this way for various types of scenarios including:


And, to further analyze this topic, I would look at each month of the year separately, and then the entire year as an aggregate. In addition, I would play with the age of kittens a little to see if the data change in any way. For example, define a kitten as anything under 6 months old, or twelve months old. And, then further split the age groups: kittens vs. seniors, kittens vs. young adults, kittens vs.adults, etc...

Let me know if you have any questions about this particular analysis, I’d love to hear how your shelter’s data stacks up!

Darlene Duggan
Chicago, IL, United States
I am an animal sheltering professional with a background in biostatistics and epidemiology. I have seven years experience in animal sheltering, both with a large private, non-profit shelter as well as an extra-large municipal control facility. I currently reside in Chicago, IL.